For those of you who came to the Booth tour at U of C, I found the sunken ship at Booth’s other building off of Michigan Ave.

It would be difficult not to notice Christopher Williams: The Production Line of Happiness at the Art Institute of Chicago. Yellow walls line the galleries of the Modern Wing, covered with Williams’ images and text excerpts from writings on his work—some of it intentionally made impossible to read by being too high up to see. This sets the tone for a potentially frustrating viewer experience. Aside from being split into three galleries, the tombstones appear haphazardly organized at the wall-ends, and provide relatively little information about Williams’ work. Visitors are left to fend for themselves—and purposefully, as the curatorial plan and Williams’ photographs coalesce to jolt a viewer out of her everyday routine. Aptly, much of the work comments on our daily choices as consumers by (re)presenting images and objects (products) that we ingest on a daily basis. Having become so accustomed to image bombardment, singularly viewing artworks that could pass as ads against stark white walls feels suitably abnormal.

As the title implies, Williams wants us to recall that images engineer and manufacture emotions. This paradigm is repeated formally in the upper galleries of the Modern Wing. These rooms show Williams’ most recognizable photographs of pleasing and appealing readymade objects and familiar advertising scenes. Williams reminds his audience of the camera’s role as a mediator and agent in orchestrating an advertisement. He often leaves in color correction bars and photo-shoot equipment as harbingers of the relative ease of evoking emotions through ad-like imagery. For example Williams offers a car whose title has a lengthy name that lists the manufacturer and materials of the object. It floats freely in space sans car. It’s either an orchestrated advertisement for a tire product, or a part of a strange dream sequence—and in both cases becomes conceptual and iconographic.

Absent of context and slogans, the images of tires, cameras, dewy apples, women smiling with their hair in a towel for no apparent reason, all appear bizarre. The curator (Matthew Witkovsky for the AIC iteration) does not seem keen to provide much stabilizing context for those less familiar with conceptual photography. While potentially frustrating for an uninformed visitor, the AIC’s lack of interjection does stay true to conceptual work. The photographs are meant to engender a critical dialogue, and perhaps the museum—particularly one as didactic as the Art Institute—should refrain from boldly dictating the parameters of potentially fruitful discussions.

The latest TRUNK SHOW is happening this Sunday, March 16th.

This month’s exhibition features a short, five-act drama by Brandon Alvendia inspired by Filippo Tommaso Marinetti and the founding of his Futurism in 1908.

For this special episode, a limited number of guests will be invited for a ride along in the TRUNK SHOW vehicle or caravan in another vehicle.

“The performance and bumper sticker edition satirizes the futurists’ excitement around speed, intensity, exhilaration, violence, war, masculinity, aggression, adrenaline and technology with a slow, relaxing Sunday afternoon of play and mildly productive goofing off.” (From the press release.)

TRUNK SHOW is the brainchild of Raven Munsell and Jesse Malmed.  The project features monthly solo exhibitions of limited edition bumper stickers to adorn the bumper of a 1999 forest green Ford Taurus.

Meet at the Pulaski Park Field House (1419 W. Blackhawk St.) parked outside the Multiples Fair starting at 1 o’clock. Tours will leave periodically and last under 30 minutes.

Foggy Fantasies / Zones of Privacy is the lastest opening of Chicago Artist Coalition’s HATCH Projects for the 2013-2014 season.  Curators JGV/WAR (J. Gibran Villalobos and Will Ruggiero), managed to turn the often tight CAC space into a pleasant, breatheable viewing experience that brilliantly shows the sculpted wood furniture sculptures of Lily Dithrich, video work by Kiam Marcelo Junio, and photo-sculptures from Andi Crist.  The co-curators reference their method of “shadow curating,” in which they antagonize each other–and that much comes through in their challenging and thought provoking essay.

Some of my dreams came true on Friday evening at the MCA Stage of the Museum of Contemporary Art, Chicago.  I had the privilege of watching Kyle Abraham and his six person ensemble, Abraham.In.Motion meld modern with hip hop dance matched to a mix of all my favorite jams.  Old school and soul favorites like Mary J. Blige’s “Leave a Message,” Johnnie Taylor’s “Cheaper to Keep Her,” and Ann Peebles “I Can’t Stand the Rain” blended into hits from the so-called “urban top 40” category—Beyoncé, Tweet, and Kanye West.

The Radio Show is an ode to the importance of radio to cultural taste and communication—particularly in Black communities in the U.S.  Abraham raises important questions about music and audio as methods of communication, and the airwaves as a platform for discussion and debate.  What happens when media becomes increasingly homogenous and those local stations disappear, as they have been over the last few years?  The Radio Show’s narrative weaves notable tracks with clips from Abraham’s favorite radio station growing up, Pittsburgh’s now defunct Hot 106.7 FM.  The choreography is appropriately sentimental and celebratory.

While the show’s run at the MCA is through, turn that dial from radio-land to the internet to learn more about Abraham.In.Motion: http://www.abrahaminmotion.org.

Not to Miss: Kendell Geers to speak at Gallery 400

As part of his Visiting Artists Program lecture tonight at SAIC, Kendell Geers ushered his audience through his personal journey—just like most every other lecture delivered in the history of this program.  Unlike all those other artists, however, Geers managed to bond particles of politics, language, culture, alchemy, tarot and mysticism, religion and ritual, and pataphysics. (You won’t be disappointed if you google the last term.)

Geers opened his lecture with a forewarning, the he must start by speaking as the archetypal Fool: innocent, trusting, and naïve.  This aptly describes the young Geers, who was born into a working class and typically racist Afrikaner Boer family in Johannesburg.  Geers was but a boy during the Soweto riots of 1976, and the rest of his life and artistic career have been dedicated recalibrating himself from violence of Apartheid.   He ran away from home and army conscription at fifteen, and was a political refugee in the United States through 1989 till Mandela’s release in 1990, at which point he returned to Jo’Burg.

Upon his return Geers famously covered himself in blood taken from his own arm.  He characterized Bloody Hell as a completely intuitive piece—what he needed to do in order to find or create a “new morality, new heritage.”  His performance has clear ties to indigenous rituals related to blood cleansing (including some Congolese rites which he mentioned) as well as medieval Christian ideas and images related to the act of anointing. 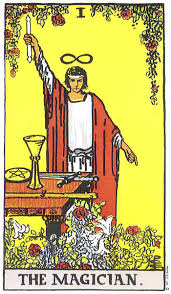 No longer the Fool, Geers now sees himself as the conscious, cunning, dexterous Magician—a figure who exhibits masterful skill in linking the material and immaterial worlds.  Living up to Sol Lewitt’s maxim that “Conceptual artists are mystics rather than rationalists. They leap to conclusions that logic cannot reach,” Geers’s recent works attempt to merge several concepts that are likely preternatural to some.  POSTPUNKPAGANPOP (2008), for example, forces viewers to encounter themselves in a mirrored floor while moving through several rooms constructed with sheets of South African-made, internationally used razor wire—a material that represents incarceration, prohibition, and violence.  Geers believes that the mirrored floor joins two worlds, two realities: the first being the perpetual self-loathing reinforced by capitalism and never being good enough, and the second being a gateway into other, comingling realities.