I was unfamiliar with he artist Laszlo Moholy-Nagy prior to this exhibit at the Art Institute. In fact, I can’t say I had done any research on the artist prior to visiting the museum, and went into it thinking he was an active contemporary artist. But this exhibit was totally different than I had intended. My exposure to true Bauhaus has been limited to slides in art history classes, mentioned in passing before moving on to post war art and architecture. What struck me about Moholy-Nagy was his interdisciplinary approach to art-making, from video (which was often a predecessor to chance-art), to painting, to drawing, to photography, etc. He was truly an artist at heart, constantly making and experimenting with form and media, and very skilled at that. His keen eye for space and color invites the viewer to step out of the mundane, dirty urban streets and into a streamlined, clean, almost musical world. Moholy-Nagy invites us into a purely transcendental space, a place where humans enter to experience true objectivity and peace, peace in a world tortured by the aftermath of WWI, being slung into the Depression and the dawn of WWII. Moholy-Nagy’s work is reliable without being boring. It’s dynamic without being messy. And in the midst of all of this, it retains its truly human core. We see that in his 1927 work “Jealousy,” depicting a man and woman and their shadows, a geometric study and collage of raw human emotion.
The exhibit itself was extremely effective in both its exhibition of his work, as well as creating an authentic context for the work, a context which enhances through the architecture of the space. There was, obviously, the room which he himself designed, but overall, the use of chromium and flat white walls in the rest of the exhibit, the creation of permeable and impermeable space made for a really effective environment. It’s a modernist heaven, in which these daring images dance and take shape. It was totally interactive, as Moholy-Nagy would have wanted. We walk through, we participate, we consume and respond to these ideas and experiments he is laying before us. His National Socialist sympathies are a tremendous influence on his work: anthropocentric and progressive, unrestrained by the centuries-old systems of oppression which had, until the early 20th century, held consistent rule over Europe.
Overall, the exhibit was very effectively presented and masterfully executed. The work was exciting, capturing the reader in its dynamism and innovation, timeless and refined. 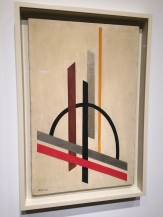