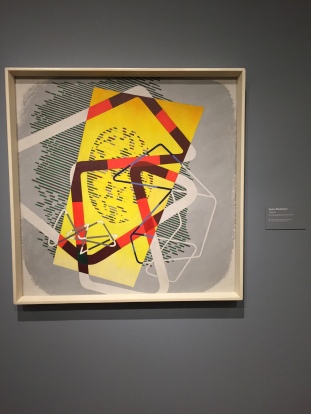 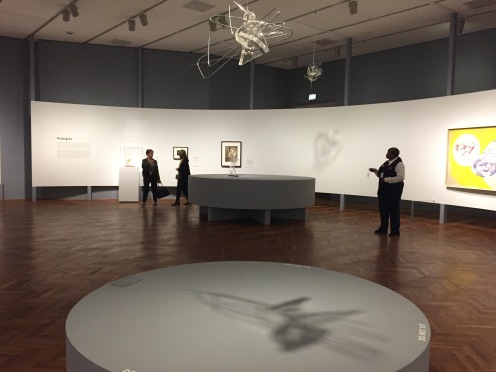 The Maholy Nagy exhibition included a large range of work, from photograms to sculpture.  I was previously only familiar with his photograms, but his sculptural work is really extraordinary.  Some of his sculpture was like looking at a photogram in reality, the sculpture served as an interruption to light that cast a remarkable shadow on the wall or platform.  The use of light and shadow is more interesting in real space rather than on a two-dimensional surface.  Photograms themselves are somewhat boring after the first few, however constructing one before the viewer’s eyes is much more interesting.

The two-dimensional work was less interesting than the three-dimensional work.  I’ve never been a huge fan of his work, however the flat work just seemed to be pointless for the most part.  The shapes and colors seemed rather arbitrary.  There were interesting things going on with transparency and color relationship but not interesting enough to hold my attention for more than a few moments.  I found myself walking past much of the flat work after taking photographs for writing the review.  I will say however, that the presentation of the curving room was a great way to lead the viewer through the space and change the viewer’s relationship to the work.  Rather than being in a rectangle or square room with work on the walls, the curved false walls provided a wonderful flow for the viewer to move through the space.  What the two-dimensional work lacked in getting my attention was made up in the three-dimensional work.  The metal and plexi-glass work was extremely interesting.  The plexi was incised and formed to activate space in exciting and interesting ways.

The most interesting two-dimensional work in the exhibition was the double sided frame that had two works, one on either side.  This work protruded into the space of the viewer and granted a very different experience.  This is something I myself have done in much the same way, without the knowledge that Maholy Nagy had done it.  This method of presentation allows for an entirely new dimension to view flat work, instead of viewing it as a two-dimensional work it is suddenly taken into the realm of sculpture.  What does it mean to view a two-dimensional work as sculpture?  The reality of this question is that two-dimensional work already exists in the three-dimensional world that is simply forgotten or looked past.  The exhibition could have almost been mistaken for a contemporary exhibition, which speaks about how much Maholy Nagy was questioning the art world with his work.  While some of the work was uninteresting, the rest of it was extremely enticing.