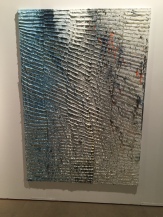 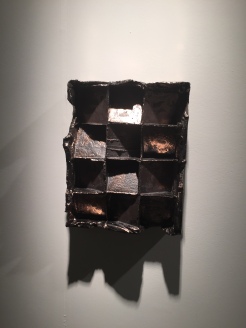 Expo Chicago was something I had not experienced before.  I had heard so much about the Expo since I’ve lived in Chicago for over a year now.  It was not at all what I had expected.  From the walk all the way through Navy Pier’s mall, up to actually entering the Expo was an extremely odd experience.  The journey into the fair set a very peculiar frame for Expo that felt consumer centric.  The entire atmosphere of the fair was perplexing.  It’s rather odd as an art student, to go to a fair like the Expo, which is primarily for dealers and collectors.  As a student, most of the dealers felt unapproachable, they seemed to be mainly concerned with the potential collectors.  While very understandable, as it is a fair for dealers and collectors, it was an odd area for me to be in.  The food and drinks were overpriced as well.  Bottles of water were $5, while wine was $12 a glass or more.  The fair as a whole had the feel of a high school art show blown out of proportion, where the art is actually selling for large sums of money and the food and drinks are overpriced.  The event really seemed to be for the wealthy, students like myself would have to go back downstairs to Navy Pier’s shops to get food and drinks.

The art itself ranged from extremely uninteresting to very interesting.  There was so much work that was uninteresting that it’s fairly hard to remember the work I was interested in.  There was a particular German booth I was interested in with bronze and ceramic wall pieces, as well as oil and acrylic paintings.  When I inquired about these pieces the dealer just gave me a pamphlet which I looked at later.  The pamphlet was in German and I don’t speak German, so I was rather discouraged.  I don’t know if it was because I was obviously a student and not a buyer, or if she just didn’t know much about the artists and work she was showing, but I didn’t get much information from her either way.

There was a particular piece that puzzled me not as the viewer but as the person watching the people looking at it.  It was a cylindrical wall piece that had a mirrored back and mirrored interior walls.  The piece created an infinite visual space within it that just kept seemingly receding to the viewer.  People were absolutely amazed by the piece and even looked around the other side of the wall to check that it didn’t actually go through the wall.  I knew how this piece worked and was rather amused by their astonishment.  However, upon further thought, I realized that this is probably how the public views a lot of art.  As an artist I sometimes forget that I study and understand art differently than the general population, not in a snobby way, just in a practical way.  The one thing I really took out of Expo was this event.  I usually experience art in a gallery setting with other artists and other people interested in art.  A fair like Expo, really does have a wider scope than a regular gallery setting.  I suppose it’s rather disappointing that all I took from Expo was a changed perspective, I hoped that at least one piece would catch my eye.