A Studio Visit with Stevie Hanley

In anticipation of our upcoming show at FLAT Space Chicago, I conducted a studio visit with Stevie Hanley, a second year MFA candidate in SAIC’s Painting and Drawing department, who will be featured in Perverted Living: A Summer Social.

I was aware of Stevie’s practice before we met. A discussion had arisen between friends surrounding his interest in the perversion of “sacred space”, such as the bedroom or the kitchen. As someone who is extremely interested in transgressed boundaries, I was intrigued to see his take on things; I was pleasantly surprised.

It takes a bit of time to become oriented when in Stevie’s studio. Like most artists, he is working on many different projects at the moment, but it seemed that Hanley had his mind on vastly different things. Tacked to the wall are numerous “chemical studies” on Mylar, interspersed with incredibly detailed drawings of spiders, and placed next to soaring gelatinous wooden sculptures.

Also hanging in his studio are his 2D mattress studies opposite both found and sculpted mattress shells. When I had heard that Hanley worked with mattresses, I was concerned that the mattress had been “done”. From Rauschenberg to Whiteread, the motif is not new, but I was stuck by Hanley’s deconstruction and the raw beauty in his use of wax and found fibers. When asked to describe these works, Hanley credits a curiosity with skin, textures, and sensations that led to a fascination with dirt, the base, and most importantly shame. Using shame as a force of energy to explore the role of dirt, Hanley states: “dirt is nothing more than matter out of place.” Dirt is associated with the floor, the unwelcome; the unwanted bits that cling long after you think they’re gone. Interested in the elevation of these perversions, Hanley physically lifts his deconstructed, manipulated, and dirty mattresses from the floor displaying them erect, reveling in their revolt. 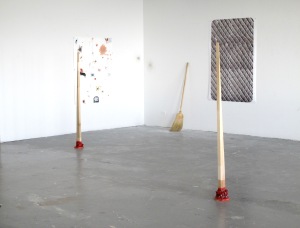 We then discussed his newest fascination: the broom. Obviously in sync with the dirt motif and elevating the base, Hanley is currently playing with the casting of brooms, using different types and colors of wax, incorporating them into his existing installation-based works. However, what I found to be the most interesting was the mold itself. From his mattresses to the brooms, to the gelatinous sculptures, Hanley continuously seeks and manipulates the mold. In discussing this, he admitted to not seeing this connection before but will explore it further.

Stevie Hanley has a lot going on, but he has managed to unite all of these works under the studio heading “Pervert Kitchen”.  His fascination with the base, the dirty, and the unwanted convenes in his space where he takes “permission and pleasure in a practice that aims to harness the experiences of shame as an energy of revolt.” This energy is palpably present and I couldn’t be more excited to see his works installed this may.

To find out more about Stevie’s practice join us May 2nd at FLAT Space Chicago from 7:00-10:00 pm for the opening of Perverted Living: A Summer Social.  Also featuring the work of Jacob Raeder, a first year MFA candidate in SAIC’s Ceramics department,  Perverted Living is an exhibition that plays with the notions of baseness, sensuality and subjugated senses within the framework of contemporary lifestyle choices. For more information on the conceptualization, artists, and work included, check out our press release below!