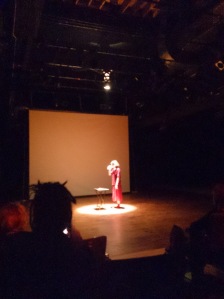 New blood is a performance festival largely participated by the performance department in SAIC. There are more than 15 works presented in this two day events. I went there for one and half days. Wei Hsinyen present her way of saying goodbye by interact with different object and recreation of audience’s response, it’s a short work but with careful thought and poetic language. Michal Samama recreate men’s gesture in female body and a piece of paper, though nudity is nothing new in 21 century, I still feel strong challenge from her work by how she embody the male gesture which made me almost ignore the existence of the female body, but the same time the nudity still reminds me the performer’s gender. One thing I noticed might also related to our discussion in the class which is how the documentation process taking a part in the whole performance. There’s an one hour performance on Saturday, artist invited different age person sharing their stories with audience, which is a very nice idea and warm work in a comfortable way. But the camera are all around and, I think the cameras made people aware of what they will be look like on the screen in the future instead of who they are there on the spot. I believe the camera’s influence the work, but I don’t really see any artist response to this consideration.