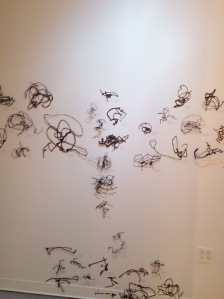 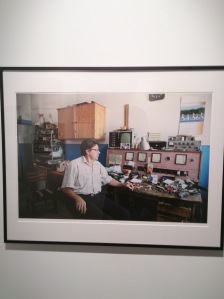 This show is curated by Jan Tichy. The show invited artists to submit work related, investigates, discusses, or is influenced by the technological advances that have had an impact on all aspects of our lives and experiences. In the beginning i thought it’s a vague theme, but the works there are actually amazing. I would say the works speaks louder than the curatorial statement. But I don’t found it’s any problem. In this show, many pieces are outstanding, piece made by Christine is a series of paper cutting, which is she explore her body gesture through digital signals, the shape and flow in the objects became a signature, a drawing and calligraphy. Phil Peters’s work is a fence with telephone on two sides, it’s a simple narrative of the construction of communication early in the  west, the telephone wire are based on the fence for protect railroad. The object is fascinate without the story behind but the functionality made me curious about the story behind, in the same time it doesn’t decrease or flatten the depth of the work. The critics might go to the artist are all from SAIC, but it’s the strength and diversity of the works did defend itself and made the show stand sturdy.