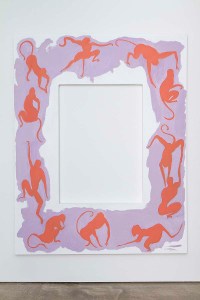 Allison Katz (b. 1980, Montreal, Canada) is currently based in London, England. She graduated in 2008 from Columbia’s MFA program. Solo exhibitions in
2013: “The Thames started moving. Someone in Oxford is running a bath” at Johan Berggren, Malmö and “Regardless” at Laura Bartlett, London; as well as a
billboard commission in Rome, commissioned by the Fondazione Pastificio Cerere. 2013 group shows include “Tussie–Mussie,” 1857, Oslo; “I Am The Magic
Hand,” Sikkema Jenkins, NYC; “The Stairs,” Algus Greenspon, NYC; and “Notes on Neo–Camp,” which debuted at Office Baroque, Antwerp and traveled to
Studio Voltaire, London. In July 2013 she curated her first exhibition, “Portmanteau” at Johan Berggren, Malmö. Her work has been featured or reviewed in Kaleidoscope, The New Yorker, The New York Times, The Art Newspaper and Artforum, amongst other publications.

Presented by the Painting and Drawing Dept. at the School of the Art Institute of Chicago